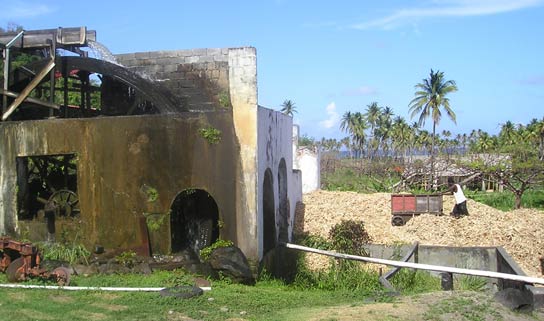 You will find Rivers Rum 'up north', near the beautiful (but treacherous) north east coast. Not far from Tivoli, not far from Lake Antoine. The place dates from 1785, though there may have been distilling activity there even further back... This is a distillery that runs all year.

A bit of a contradiction: the concentration of sugar in cane is at its highest during the dry season (January to May, in theory), but the water wheel which powers the cane press is obviously more likely to work when there is plenty of water in the river, i.e. in the rainy season (June - Dec., also in theory.)

The juice is roughly filtered by scooping up the 'bits' and letting them drain through a wicker mat. The juice flows into the main building, where it is 'ladled' through a succession of big metal basins ('coppers') until it is brought to the boil in the last one. The ladling process looks just like rowing a boat. The fire below the boiling cane juice uses bagasse as fuel: nothing is wasted!

Once the right sugar concentration has been reached, the hot juice is spooned into cooing tanks at the back of the building. It spends two days there, during which time it is invaded by natural yeast's in the air: fermentation starts spontaneously: no yeast is needed.

The fermenting juice is then pumped upstairs into concrete fermentation tanks, where it bubbles away for eight days. After this, it is ready for distillation. Here, the fire below the boiler is heated with wood, because bagasse does not burn hot enough to (super-) heat the liquid. 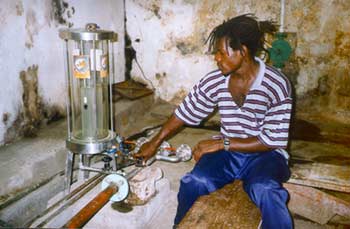 A visit to Rivers Rum will keep you amazed as you continue to follow the progress of the manufacture of rum in a manner that has not changed for generations.

The apparent 'hi tech' of the hydrometer / thermometer installation that tells the distiller the strength of the brew is immediately contradicted by the 'low tech' of the hand pump used (under customs supervision) to remove the rum from its sealed tank. Then there is the 'no tech' of the bottling process.

After all this, your credulity is stretched to bursting point as you sample the product. Words fail most people, partly as they fight to describe the impact of a factory that refused to be dragged into the nineteenth century, partly because the vocal chords are rendered incapable for a while by the 70% potion. Never mind. You can always buy the t-shirt.