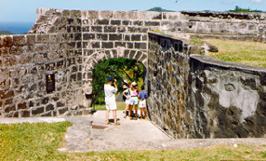 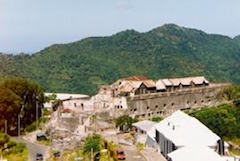 This site really has something for everyone. History, landscape, sea, views, and more views! If you are interested in history, in the changes,in power that the Caribbean islands underwent so often, then this place symbolises it.

Along with three other forts, one just next door and eminently visitable, though not in good condition (the Americans bombed it in 1983), Fort Frederick was started by the French to secure their position after they had so easily captured the island from the British in 1779.

The French had confounded the British (who had been anticipating a naval attack) by attacking from inland. Not wanting to be caught out in the same way, the French constructed Fort Frederick with its cannons facing inland, rather than out to sea, earning it the nickname "Backwards facing fort." 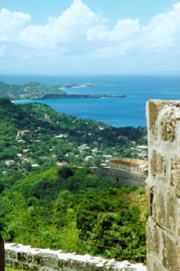 Fort George, the Island's main fortificartion; the ruined hotel which was bombed in 1983 (another one!), having been taken over by Maurice Bishop's party, thus housing his assassins at the time of the American "intervention"...

The reason so many people remember Fort Frederick, though, is for its location. It really does afford a world class view in every direction.

Go in the morning to look down onto St. George's, the picturesque Carenage, the harbour, and Fort George. Go in the evening, with the sun over the sea, to see (maybe) a spectacular sunset, with the hills behind you floodlit by the glow. Go at any time of day to see the south-western peninsula, the airport, the roofs of St. George's University, Grand Anse Beach, tiny Glovers Island, used briefly for whaling in the 1920's. Go in July - August to see the entrance adorned with the scarlet blossom of Flamboyant trees. Look across to the building with the second-best view of the southern part of the island: our prison!

Fort Frederick is easily accessible, being about 2 km. from the centre of St. George's, though very, very uphill of it.