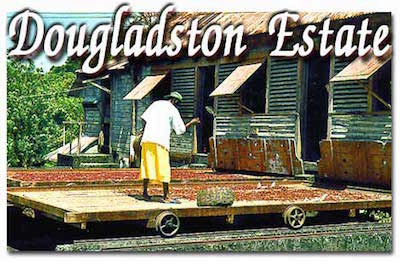 The Dougladston Estate is just outside Gouyave, about two thirds of the way 'up' the Island as you go up the west coast from St. George's.

Just before you enter the fishing town of Gouyave, there is a bridge. And immediately before the bridge, a right turn. (Sorry to make you do all that reversing.) If you take this right turn, you will immediately wish you hadn't. The road has seen better decades, and would make an excellent testing ground for industrial strength suspension systems. If you have hired one of our jeeps, please be careful!

The road is short, however, and there is every incentive, comfort apart, for going slowly. An impressive area of callaloo (the stuff that looks like rhubarb but tastes like extremely nice spinach) on the right. (If you are self catering, do boil your callaloo: it cannot be eaten raw.) Some odd trees on the left have lost their bark. No: actually, they were designed that way: they are pimento trees, aka 'allspice', because the berries taste of a mixture of nutmeg, cinnamon and cloves. And there are bananas galore, leading up to, and then down from, a little bridge. 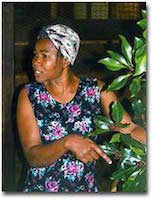 A boucan is a building with huge drying trays on rails, so that the trays can be pushed under the building if it rains, and both pushed under and locked up at night, for security. What is on the drying trays depends on the time of year: it may be mace, cocoa, cinnamon, pimento, cloves... (But not nutmeg, which is not dried in the direct sun.)

Inside the building, you will be led to a table where you will be invited to 'scratch 'n sniff' the leaves of a succession of twigs (warning: you need more than two hands to do justice to all the different leaves) and guess what the different spices are. You will then be told in some detail how the various spices are harvested and processed, and what they are used for. There will almost certainly be some that you do not know. Tonka beans, maybe, and sapote. And there are some impostors: cocoa, hardly a spice, is there, and indeed there is an adjacent building, seldom visited, where cocoa beans used to be processed using steam technology. Many of the spices will be in Calabash shells, excellent and practical bowls. And then there are loofah 'sponges', which are not sponges at all, but the fibrous interoor of a cucumber. And that mysterious little bottle that is passed around for all to sniff. It is not too difficult to guess what is in it, but what is it used for? No, it's not my job to tell you here. Look up, and see the bamboo canes with double blades at the end, used for cutting down cocoa pods.

Dougaldston is a major slice of this Island's history. If you have time, gravitate to the back, and you will discover the offices and the ledgers where records of spices bought and sold in the early 20th century were kept. Ask to see the steam powered cocoa processing building, with its asbestos clad boiler, its steam powered drill for maintenance of the steam technology, and the first, small-scale, attempt at a nutmeg oil distillation plant.

If you want to buy spices, this is an opportunity to do so. You will normally find plastic bags containing cloves, cinnamon, nutmeg, mace and bay leaves for (at the time of writing) $US2. All fresh, and not ground: that way, they keep longer. And this is one of the places where you can buy cocoa balls: grate them over hot water, add milk and sugar, and you have 'cocoa tea'. Or use them to give a chocolate flavour to ice cream and in baking.

Dougaldston will introduce most of Grenada's spices to you, and will leave you pondering the past and present realities of life of those whose living depends / depended on this branch of agriculture which is so peculiarly Grenadian.