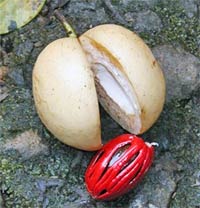 The name rolls off the tongue. But what of the spices? Well, we have quite a selection. Cinnamon, tumeric (known here as saffron) cloves, bay leaves, tonka beans (eh?), pepper, ginger, pimento (allspice), vanilla... but far and away the most important, and the most prominent, are the twin spices of nutmeg and mace.

You cannot really miss nutmegs on Grenada. Drive anywhere north (or east) of St.George's, and you'll find yourself among nutmeg trees. If you do not know what you are looking at, you may well think they are apricots, though. We have thousands and thousands of trees, and Grenada is second only to Indonesia in nutmeg exports.

And there they are, in our national flag, too. That's the nutmeg fruit that's split open to reveal the red mace, covering the seed. (Nutmegs are not nuts, but the kernels of a fruit.) Then there's the Nutmeg restaurant in St.George's, and the bags and T-shirts with nutmeg emblems.

"So what is so special about a nutmeg?" we are sometimes asked. "Not a very interesting spice, is it?" Let's see... The fruit is made into jam. And liqueur. And syrup, without which a Grenadian rum punch just would not be Grenadian. Or add the syrup to fruit salads, eat it with pancakes, baste chicken with it. 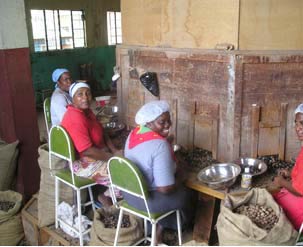 Mace turns up in lipstick and nail varnish, as well as in most of the world's sausages. The shell of the kernel is used as mulch, as gravel, and as fuel for burning.

The nutmeg itself yields an essential oil as well as being a spice. It is used in aromatherapy massages for rheumatism and arthritis, and as an inhalation oil. (Look at the small print on 'Vicks' vapo-rub.) Not bad for one fruit! 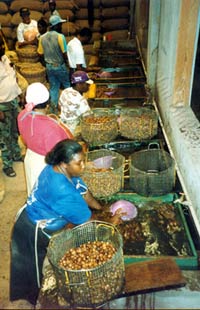 And nutmegs have a long tradition in folk medicine. In the early seventeenth century, a nutmeg, swallowed whole, then grated after it had passed through you (!) into the beer or wine of the woman of your desire, was said to make her compliant to your wishes. (No evidence to say whether it worked for women as well.)

Nutmeg oil was the viagra of the day, though it had to be applied externally. And anyone receiving a nutmeg on New Year's Day who carried it in his/her pocket all year was protected from broken bones, strokes, haemorrhoids, scarlet fever and boils on the spleen. (Presumably, the effect will be even stronger on New Millennium's Day: better order your Grenadian nutmeg now.)

To get the most out of out nutmegs, you really need to visit a factory. You can find these at Grenville, at Victoria, and the most visit able of all is at Gouyave, on the west coast.

For just US$2, you get a comprehensive guided tour around the processing: storage, cracking, sorting, the water test, grading by size. You will know when you are approaching a factory: just follow your nose! The tour lasts about 20 minutes, and leaves you with a lasting impression of the versatility of nutmegs, and of the reality of Grenadian working conditions.